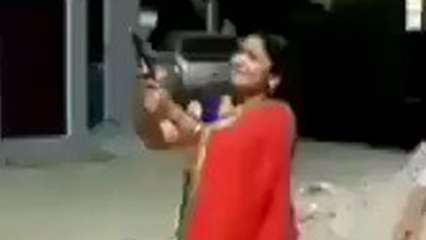 On Sunday night at 9 PM, the whole country lit lamps, candles and flashlights for nine minutes on Prime Minister Narendra Modi’s call. Some also treated it as Diwali and burst crackers. In the celebration, a BJP leader in Balrampur district took the celebration to another level and fired in the air.

Manju Tiwari, the District President of BJP Mahila Morcha in Uttar Pradesh’s Balrampur, came out of her house with her husband Omprakash Tiwari’s licensed revolver and started firing in the air after lighting a lamp. She later uploaded the video on Facebook, which went viral.

The Congress used the opportunity to attack the BJP in the state, tweeting the video as questioning Uttar Pradesh Chief Minister Yogi Adityanath is action will be taken against her.

“BJP leaders remain at the forefront when it comes to breaking the law. Yesterday, PM’s appeal was to lighten lamps but see how a BJP leader and President of Balrampur BJP Mahila Morcha openly fired for the demonstration and put the video on Facebook. Will Yogi Adityanath take action on this?” said the tweet.

The leader was booked by the police, following which, she apologised for her act. “I saw the entire city illuminating with candles and earthen lamps. I felt like it was Diwali and fired in the air out of jubilation. I accept my mistake and apologise for it,” Tiwari said.

Millions of candles flared up on Sunday as India switched off all lights for nine minutes as 9 PM as a show of solidarity amid the coronavirus disease (COVID-19) outbreak, that is spreading across the country like wildfire.