This week, some telecom operators came under consumer fire for sudden, unannounced, hikes in their data tariffs, prompting parliamentary intervention. At least one of the telcos involved has blamed the incidents on system glitches.

As a longtime consumer rights activist, naturally my sympathies are with ordinary mobile subscribers who have had to endure the loss of value through no fault of theirs.
Ghana’s regulatory agency, the National Communications Authority (NCA), has been swift to order the telecom operators to fix their issues and compensate consumers. All well and good, but are we going to see similar speed in addressing the value for money problems that have been created by extractive and exploitative regulations over the course of the last decade?

You don’t have to take my word for it. In May 2018, the sitting Minister of Communications went to Parliament and boldly announced to a stunned chamber that according to the records available to her all the money paid to various companies in the name of revenue assurance, revenue protection, revenue optimisation etc, over the last decade – some $200 million thereabouts per my rough calculations – is good as wasted since the only thing these companies have been doing is taking data from the telcos and passing on to government in exchange for fat cheques.

According to the Minister, in the absence of what she calls “real-time monitoring”, all the previous efforts could not have detected any malfeasance on the part of the telcos and were thus unnecessary. Having served us this shocking confession from the government system, the Minister then briskly went on to justify even more spending in furtherance of similar money-wasting initiatives, such as the ongoing Kelni GVG project and its claims of using telecom traffic measurement to more accurately estimate telco revenue and thereby uncover tax fraud.

In a recent appearance on TV3’s Hot Issues, hosted by Stephen Anti, I could hardly hide my angst when Stephen, in the service of balance and objectivity, read on air a portion of a recent statement from the Minister purporting to justify the Kelni GVG contract.

Let me summarise for readers in the briefest way possible the comments I made on Hot Issues about why the Minister’s statement is dangerously wrong and ought to be retracted.

The genesis of all this “telecom tax revenue monitoring” business was a decision in 2008 to set a “floor price” for international inbound calls of $0.19 of which roughly 32% or $0.06 was to be paid by the telcos as a tariff to the Government (attempts to charge tax on the remaining 13 cents as “Communication Service Tax” was however defeated in the courts in 2013).

By imposing price control on this segment of the industry, a huge artificial arbitrage opportunity opened up for crooks to bypass the official channels and terminate international calls over the internet on local SIM box installations for as low as $0.04. This meant they could charge unscrupulous carriers a much lower price than the official minimum price of 19 cents and still pocket a substantial markup. “SIMbox fraud” had been born.

To fight this problem, needless as you would recall in the first place, the government engaged GVG, a Haitian company to provide a solution to monitor all inbound calls and to use random pinging methods and geolocation to identify SIMbox installations and take them down.

Whilst the problem itself was self-inflicted, there is a faint logic to the idea of monitoring call volumes to ensure that tax evasion is minimised. Given a fixed rate and charge and a fixed amount of tax to be collected per call, volume estimation becomes a sensible way of benchmarking revenue.

Unfortunately, when the decision was taken to extend revenue monitoring to domestic call traffic, as part of a wider CST imposition, and Subah came into the picture in 2012, common sense went out of the window and the principle of using volume benchmarking remained even though there is no price control in the domestic call market, and rates and charges vary considerably from period to period.

Since CST is based on a percentage of the charge value (“ad valorem” in the jargon) the revenue generated from it is tied to how the telcos “rate” (or price) each call or data session, making a linear map between call volumes and total revenues, much less tax take, completely arbitrary.

Unless the Government imposes its own pricing regime on the industry and substitutes its rating software for that of the telcos, any monitoring shall still be based on rating data supplied after the fact by the telcos, making the idea of monitoring call volumes “in real time” as a way of benchmarking revenue completely flawed and illogical.

2. But Even if Volume Fraud is an Issue, There is a Cheaper Way to Detect it

But even if, contrary to all sound technical analysis, the government still wants to find out if the telcos are lying about the volume of traffic on their networks, there is a cheaper way to go about it: using a method similar to the “random pinging” approach currently used to fight international inbound call fraud.

In a brief essay written during the heat of the initial Kelni GVG controversy, I demonstrated how with less than $100,000 a solution can be built to initiate thousands of random calls to the mobile networks so that the call records provided by the telcos can be examined for deliberate or accidental omission of these test calls. The percentage of missing test calls shall map directly to the likely percentage of undisclosed calls in the wider sample.

No one has been able to show why this is not a vastly superior solution costwise to the $1.5 million a month ($178 million over 2 x 5 year terms) Kelni GVG monitoring contract. This is a solution that can cover all the purported four services provided by Kelni GVG at less than 5% of the total cost of the Kelni contract over its life cycle.

3. Let’s Be Clear: this Contract Implies No Savings on Previous Ones

One of the most earnest cases made by the Minister of Communications in her public statement of last month is the claim that the extant contract with Kelni GVG represents an improvement on the Afriwave and Subah ones.

This is plain obfuscation.

First, the Afriwave contract is very much with us, contrary to plain untruths served to us by officialdom. I have confirmed personally its existence and continued operation.

Considering that the interconnect clearing house (ICH) concept was justified on the same premise of blocking telco underdeclarations, one would have thought that the Minister would actually make the ICH project redundant as promised. But, no, like so much of the posturing of politicians in Ghana, it was was all mere theatrics. Since early 2019, the nearly moribund ICH has been receiving a major lease of life because of Huawei supplier credit arrangements and a significant proportion, by some estimates 25%, of call traffic now traverses the ICH. Afriwave is thus getting paid at least the $1 Million a month it last negotiated during the Subah-NCA impasse.

In effect, there has been no $1.1 Million savings. Even worse, the Government had to buy off Subah in order to bring in Kelni GVG. By our reckoning the legal costs of doing so amounted to at least $40 Million. So, rather than saving the country $1.1 Million a month, the Kelni GVG decision is costing the country (using crude amortisation over the period of the Kelni GVG contract) an extra $233,000 a year compared to the Subah-Afriwave combo.

4. No, There is No Evidence That Kelni GVG Has Detected Any Tax Fraud

The reader might be of the stock of pragmatists who believe that notwithstanding all the back and forth debate, the proof of the pudding is in the eating: has the Kelni GVG program more than a year on uncovered any major tax fraud or not?

The Minister says, yes: to the tune of $85 Million over a period of three years examined. She goes on to claim that a total of $250 million would have been saved by the end of the contract with Kelni GVG. How did she come by these numbers? She doesn’t say. Why hasn’t any telecom executive been arrested and why is no telecom company under tax fraud investigation? She doesn’t know. Has she filed a formal complaint to the Police and the GRA? No.

Some readers may recall that in 2018, as part of the effort to mobilise public support for the Kelni GVG deal, the Deputy Minister of Communications said that as a result of the real-time monitoring regime, revenue from CST shall jump to $200 million a year.

If any of what the two Ministers are saying is correct then all we need to do is chart the growth rate of CST revenue from 2008 when it was introduced (annualising the 2008 half-year outturn) to end of 2018, when according to the Minister “real-time monitoring” commenced, and then compare with the revenue recorded at end of 2019 to see if there has been a sudden jump in revenue as a result of the introduction of said “real-time monitoring”.  Seeing as the entire logic of the need to spend nearly $180 million on this endeavour is premised on the notion that only real-time monitoring can safeguard revenues we ought to see a sharp upward turn in the curve from 2018 onwards.

But what do we see? Nothing. All the evidence shows that the growth rate of CST revenue only tracks such macrostructural trends as inflation, exchange rate movements, GDP growth, subscriber growth, and growth in the CST tax rate or coverage (as in when the rate was jacked up by as much as 50% in late 2019 or when the government insisted that domestic interconnect charges should be subject to CST only to be rebuffed by the Courts a couple of years ago). 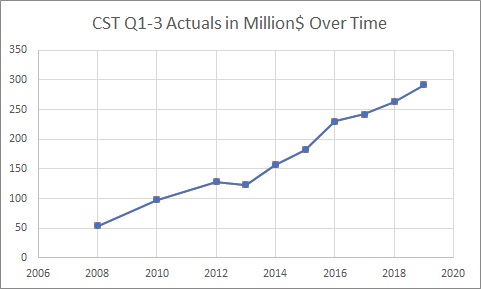 Real-time traffic monitoring has had no discernible statistical effect whatsoever on the growth rate of CST revenue and any multi-variable regression analysis should bear this out. In fact, considering the Q3 2019 increase in rates by as much as 50%, the current trend is one of underperformance, as the Minister of Finance freely admitted to Parliament during his budget speech.

Simple: every month that the government continues to hand over our scarce resources to Kelni GVG and tries to address clear shortfalls in CST revenue. Instead of the $200 million promised by the Deputy Minister, the country is struggling to make even $80 Million from CST this year.

Jacking up CST rates, as the Government has been doing recently however, is clearly and painfully contributing directly to the falling value of data and voice vouchers that consumers all over Ghana keep lamenting about.