President Nana Akufo-Addo has said the programmes and policies being implemented by his government are putting the country onto the path of progress and prosperity, and will, eventually move Ghana to a country beyond aid.

Speaking at the 71st New Year School, on Tuesday, 14th January 2020, at the Great Hall of the University of Ghana, Legon, on the theme “Attaining Ghana Beyond Aid: Challenges and Prospects”, President Akufo-Addo stated that “we have started on the right path towards a prosperous future with the concrete steps we are taking to restore macro-economic stability and economic growth.”

He stated that after three years of disciplined and innovative economic management, the results have been remarkable, with GDP growth rates averaging 7% over the last three years, up from the 3.6% of 2016, and inflation standing at 7.9%, down from 15.4% in December 2016. 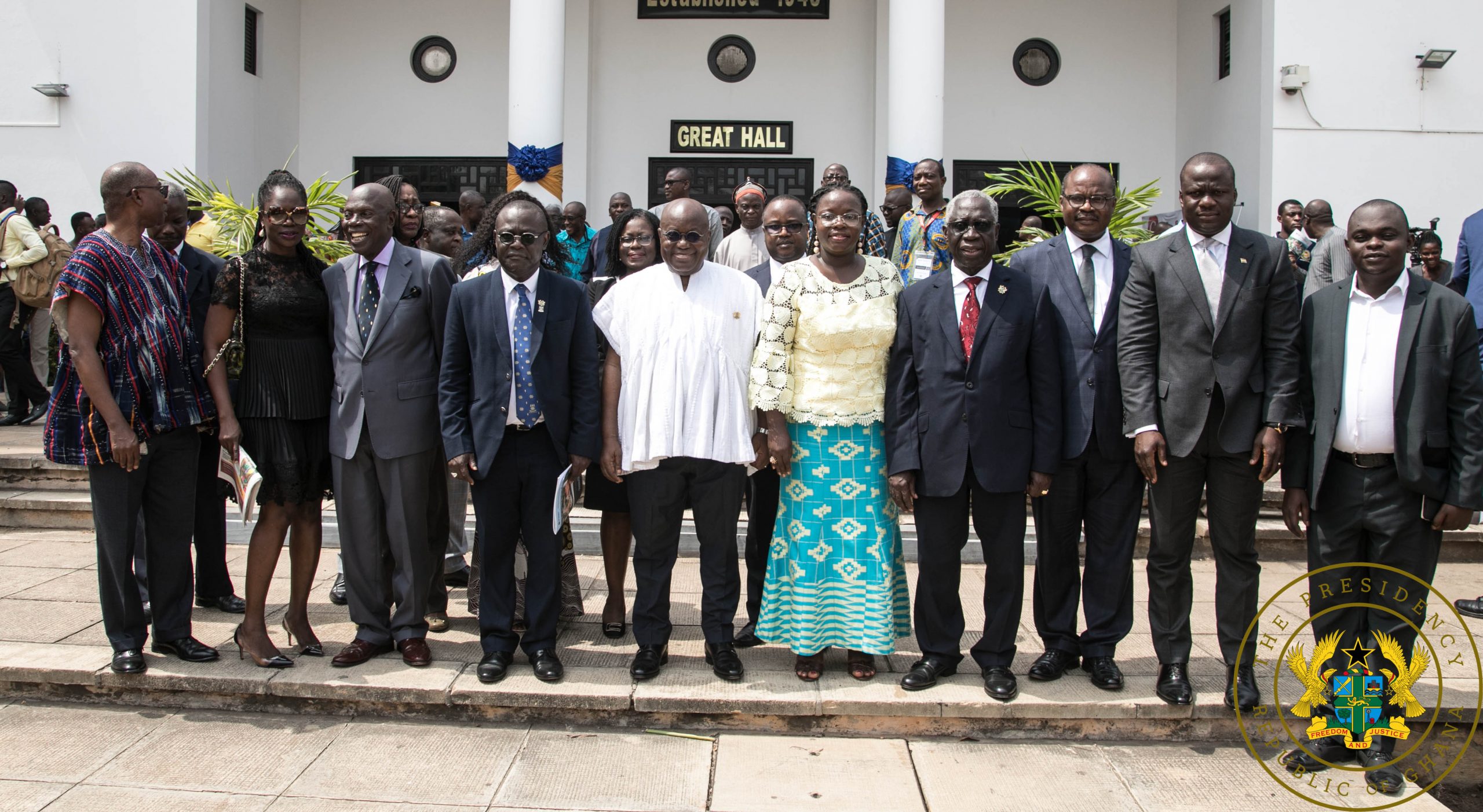 The President added that the country’s trade balance account, for the first time in more than a decade, recorded a surplus; and interest rates have gone down from 28% in December 2016 to 15% now.

“Our macroeconomic indices are pointing in the right direction, and it comes as no surprise, therefore, that, today, Ghana is the leading recipient of foreign direct investment in West Africa. This, in the long run, is fundamental to moving Beyond Aid,” he added.

Ghana’s expanding economy, the President said, is opening up avenues of job creation, with 100,000 graduates employed through the Nation Builders’ Corps; 54,892 healthcare workers employed; and 66,357 teachers getting jobs since he came into office in 2017.

“Public sector employment has increased by three hundred and fifty thousand (350,000), and additional employment in the private formal and agricultural sectors amounted to nearly two million, with 1.6 million in the agricultural sector and two hundred and sixty-eight thousand (268,000) in the formal sector. The Ghana Living Standards Survey tells us that unemployment has fallen from 11.9% in 2015 to 7.3% in 2019,” he added.

With government bent on adding value to the nation’s raw materials, President Akufo-Addo told the gathering that this is the rationale for the country’s Strategic Partnership with Cote d’Ivoire, evidenced in a joint cocoa production and marketing policy, which is already paying dividends.

He indicated that the payment of a Living Income Differential (LID) of $400 per tonne, in addition to the producer price, will be paid to farmers for all categories of cocoa beans from Ghana and Cote d’Ivoire starting from the 2020/2021 crop season, when the two countries begin to apply a new floor price mechanism for the sale of cocoa at a minimum of US$2,600 per tonne. 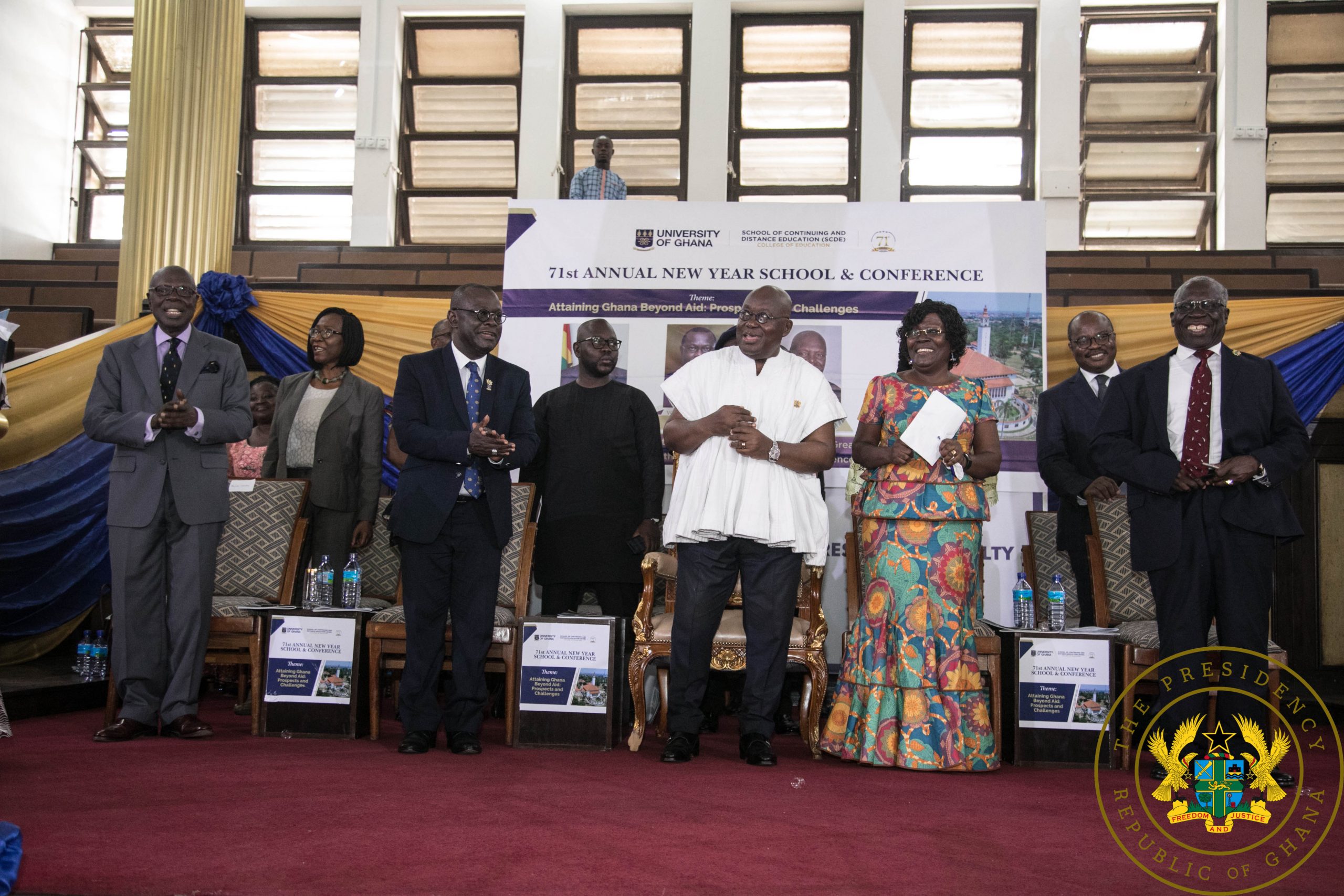 “COCOBOD has also received a $600 million syndicated facility from the African Development Bank, and Credit Suisse Group AG, to finance key components of the organisation’s productivity enhancement programmes, including the domestic processing of some 60% of our cocoa beans,” the President added.

He stressed further that steps have been taken to establish an integrated bauxite and aluminium industry through the establishment of the Ghana Integrated Aluminium Development Corporation and the Ghana Integrated Iron and Steel Development Corporation, two-state vehicles whose tasks are to mobilise the necessary financial, technological and material resources for the full exploitation of the entire value chain of Ghana’s bauxite, manganese and iron ore deposits.

Touching on corruption, he stated that, as an example, every single alleged act of corruption levelled against any of his appointees has been investigated by independent bodies, such as CHRAJ, the CID of the Police Service, and, in some cases, by Parliament itself. Additionally, Government has systematically increased, over these last three years, the funding for the accountability institutions.

“Twenty-one (21) officials of the previous administration are standing trial over their involvement in alleged acts of corruption or causing financial loss to the state, amounting collectively to the tune of some GH¢772 million, and the courts, at the appropriate moment, will deliver their verdicts in accordance with due process”, he added.

President Akufo-Addo further revealed that “we have begun bringing those responsible for the banking crisis to justice. We have one case in court, and if prima facie evidence of criminality is found in the other ongoing investigations, which, according to my information, is likely, then the perpetrators of the crises, i.e. both regulators and individuals, will face justice soon.”

On healthcare, President Akufo-Addo stated that Government is improving access to essential and quality health services through the provision of the necessary health infrastructure, equipment and logistics, including the deployment of appropriate technology as part of the drive to attaining Universal Health Coverage (UHC).

In addition to clearing the GH¢1.2 billion NHIS arrears inherited, President Akufo-Addo stated that he will commission, on 28th January, the three hundred and seven (307) ambulances for use in fulfilment of the “1-Constituency-1-Ambulance pledge.

“Drone technology has also been introduced into the healthcare system to help deliver essential medicine, blood and blood products to remote communities,” he stressed.

Through the programme for Planting for Food and Jobs, the President told the gathering that Government has succeeded in reviving Ghanaian agriculture, which had, hitherto, been in the doldrums, and ensuring bumper harvests for two consecutive years, and seeing to it that Ghana no longer imports maize.

One of the modules of the programme, Planting for Export and Rural Development, he explained, is targeted at the development of selected tree crops – cashew, coffee, oil palm, coconut, mango, rubber and shea – to diversify Ghana’s cash crop sector, which has been dominated by cocoa for the past 130 years, and ensure that the country rakes in additional foreign exchange of up to US$14 billion per year.

“The Ivorians have done it, we can do it too,” he added.