The ideal source for football results yesterday is now available

An unexpected adjustment to the top of the College Football Playoff rankings Tuesday put Ohio State in the No. 1 spot and shifted LSU down to No. 2.

With less than two weeks until Selection Sunday, it aligned the rankings so that Alabama, if it claims the No. 4 spot, would not play a familiar SEC opponent, LSU, in the playoff semifinal.

That was the most notable change from a stretch of playoff ranking releases that have been short on suspense, as top five teams in the land have remained unchanged for the past three weeks.

Would greater drama — and chaos at the top of the rankings — during the remaining two weeks help Alabama? Possibly, but conference winners who are not currently in the thick of the playoff race could add more variables for the committee that could leave out Alabama.

The cleanest and simplest path for Alabama to make the playoff involves the top three teams (Ohio State, LSU and Clemson) remaining the same, Alabama beating Auburn on Saturday and Georgia losing the SEC title game.

With that in mind, here is a look at the shrinking list of games this week that could impact Alabama’s playoff hopes:

No. 1 Ohio State at No. 13 Michigan (11 a.m. CT, FOX): Last week, it made sense for Alabama to root for Ohio State over Penn State; a Buckeyes loss would have likely kept them out of the Big Ten championship but Ohio State, as a one-loss non-conference champion, could have then boxed out Alabama for the playoff. This week, an Ohio State loss would not hurt Alabama’s playoff hopes but it might not help unless the Bucks also lose next week in Indianapolis. If not, the Tide would have trouble making a case over a Big Ten-champion Ohio State even if they dropped this one in The Big House. Root for: Michigan

No. 3 Clemson at South Carolina (11 a.m., ESPN): The weakness of the ACC this season means any loss for Clemson, this week or in next week’s championship game, could doom their chances for the playoff. Alabama would have a case over a one-loss Clemson, whether or not they win the ACC. The Tide would not have to worry about a backdoor entry into the playoff by a non-Clemson ACC winner, as that team at best would have three losses. Root for: South Carolina

No. 4 Georgia at Georgia Tech (11 a.m., ABC): Georgia taking its second regular season loss to a bottom-feeding ACC team could irreparably damage their résumé even if they recover to win the SEC title over LSU. Such a win by Tech would be nice for Alabama, but more realistically it will be up to LSU next week to push aside the Bulldogs from the Tide’s path. Root for: Georgia Tech 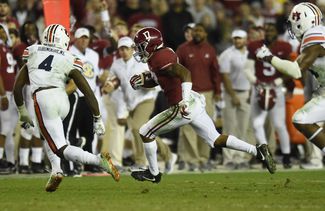 No. 5 Alabama at No. 15 Auburn (2:30 p.m., CBS): The team that Alabama most needs to win Saturday is Alabama. The rest of the day’s games would become irrelevant if Mac Jones cannot pull off a victory in his first road start of his career. ESPN’s analytics give Alabama a 71 percent chance to make the playoff with a win and a 2.7 percent chance with a loss, the biggest swing of any playoff contender’s game this weekend.

No. 12 Wisconsin at No. 8 Minnesota (2:30 p.m., ABC): Other than Georgia winning the SEC title game, one of the biggest threats to Alabama remains Ohio State losing the Big Ten championship but making the playoff as a one-loss team. The Buckeyes losing to a one-loss Minnesota team in Indy would be less of a blow to their record than a defeat to two-loss Wisconsin, so it would help Alabama for the Badgers to win Saturday and earn a trip to Lucas Oil Stadium next week. Even so, the status quo in the Big Ten — and not chaos — remains the best-case scenario for the Tide. A one-loss Ohio State alongside a conference champion Minnesota or Wisconsin would give the committee more non-Alabama options for the playoff. Root for: Wisconsin

No. 9 Baylor at Kansas (2:30 p.m., ESPN): The Bears are on the fringe of the playoff picture and would likely need a convincing win over Oklahoma in the Big 12 championship game to even be in the conversation. A road loss to the Jayhawks would end those hopes. Root for: Kansas 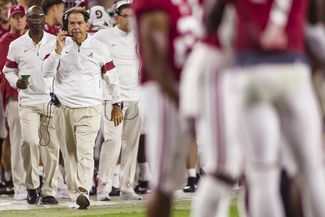 Texas A&M at No. 2 LSU (6 p.m., ESPN): There are arguments to be made on both sides of this one. LSU winning and remaining undefeated would strengthen Alabama’s only loss and keep the Tigers riding high into the SEC championship, where an LSU win could be critical for the Tide’s playoff hopes. But an Aggies road win could strengthen Alabama’s best win to this point, at College Station, which is also important for their résumé. LSU then continuing to stumble and losing the SEC title game, their second loss, would open the door for both one-loss Georgia and one-loss Alabama to make the playoff. Or, LSU could lose to Texas A&M, boosting Alabama’s win over the Aggies, and then beat Georgia, helping Alabama again. Ultimately, this result of this game matters much less to Alabama than an LSU win next week in Atlanta does. Root for: Texas A&M

Colorado at No. 6 Utah (6:30 p.m., ABC): For the third week in a row, the CFP selection committee considers a Pac-12 team to be the closest threat to Alabama. After two weeks with Oregon at No. 6, the Ducks’ loss at Arizona State slid Utah into that spot. The Utes losing at home this week, although unlikely, would likely end the conference’s chance at the playoff. The more realistic best-case scenario for Alabama is that Oregon recovers to win the Pac-12 championship game next week, knocking off one-loss Utah and likely keeping the conference out of the playoff for the third consecutive year. Root for: Colorado

No. 7 Oklahoma at No. 21 Oklahoma State (7 p.m., FOX): The committee’s recent rankings suggest the Big 12 might not be a threat to Alabama even if Oklahoma or Baylor wins the conference as a one-loss team. But either team picking up a second regular-season loss would be advantage Tide. Root for: Oklahoma State