1 Defense in the nation has not allowed a gain of at least 50 yards this season. The longest play against the Alabama defense in 2019 is a 46-yard run by Mississippi State QB Tommy Stevens on Nov. 16. The longest completion against the Crimson Tide in 2019 is a 44-yard gainer by New Mexico State on Sept. 7. They’re the only plays of 40-or-more yards against the Alabama defense this season. Every other team in the nation has given up at least four. Auburn’s offense has had five plays that have gained at least 50 yards and 11 plays that have gained at least 40 yards this season.

3 Games with at least one rushing TD and one receiving TD for Alabama RB Najee Harris this season after he scored on a 12-yard pass and a 3-yard run in the Crimson Tide’s 66-3 victory over Western Carolina last week. Harris is one of the four players in the nation with three such games in 2019, and Harris’ have come in Alabama’s past three outings. The other players are Washington State’s Max Borghi, Charlotte’s Ben LeMay and Wisconsin’s Jonathan Taylor. Harris is the fifth player in the SEC with three such games in a season in this century, joining Florida’s Percy Harvin in 2008, Alabama’s Mark Ingram in 2009, Ole Miss’ Brandon Bolden in 2010 and Georgia’s Todd Gurley in 2013.

6 Consecutive Iron Bowls have featured points in every quarter for the winning team. The most recent Alabama-Auburn game in which the winner didn’t get on the scoreboard in every period came in 2012, when the Crimson Tide did not score in the fourth period of its 49-0 victory.

6 Teams have not allowed an opponent to score at least 25 points in a game this season, including Auburn. The most points yielded in a game by the Tigers in 2019 are 23 — in a 56-23 victory over Mississippi State on Sept. 28 and a 23-20 loss to LSU on Oct. 26. The other teams that haven’t allowed an opponent to reach 25 points this season are Clemson, Georgia, Iowa, Ohio State and San Diego State. Alabama is one of the four teams in the nation that has scored at least 25 points in every game this season, along with Ohio State, Oklahoma and SMU. The Crimson Tide’s lowest-scoring game this season has been 35 points in a 22-point victory over Tennessee on Oct. 19. Alabama’s streak of 11 games with at least 35 points is the second-longest in SEC history, behind a 13-game streak by Texas A&M in the 2012 and 2013 seasons.

7.5 Sacks have been recorded by Auburn DE Marlon Davidson and Alabama LB Anfernee Jennings this season, tied with Kentucky DE Calvin Taylor Jr. for the most in the SEC. Davidson leads the SEC with 12.5 tackles for loss. Jennings is tied for second at 12 with Florida LB Jonathan Greenard.

13 Iron Bowls since the winning team has been outscored in the fourth quarter. The Iron Bowl winner has had the most fourth-quarter points in 11 of the past 13 games, and in the other two games, neither team scored in the final period. In the 2005 Iron Bowl, Auburn did all its scoring in a 28-18 victory in the first half while Alabama scored eight points in the fourth quarter.

22 Previous Iron Bowls have featured two teams ranked in the AP poll. Auburn leads the series 13-9 when both teams are ranked. Alabama is ranked fifth and Auburn 16th in this week’s AP Poll. 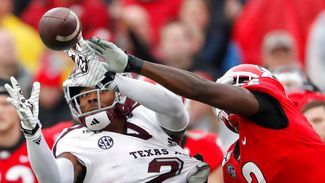 27 Percent of Alabama coach Nick Saban’s losses in SEC league games have been inflicted by Auburn. Saban has a 117-26 on-the-field record in SEC regular-season games in 18 years at LSU and Alabama for an .818 winning percentage, which is the best in the league’s history. Saban has a 10-7 record against Auburn.

46 Victories for Alabama, 36 victories for Auburn and one tie in the Tide-Tigers series. Auburn leads the series 9-5 in its home stadium. The average score of the game has been: Alabama 21, Auburn 16.