The Finance Minister, Ken Ofori Atta is seeking parliamentary approval for the use of GH₵15.6 billion to strengthen the financial sector by improving liquidity and securing depositors’ funds.

President Nana Akufo-Addo has already given executive approval for the expenditure.

A memorandum from the Finance Minister to Parliament sighted by citinewsroom.com said there was “the need to protect the financial sector” in the face of the recent clean up exercise that affected some universal banks, savings and loans companies, microfinance companies and fund management companies.

According to the document, the amount will cover some of the interventions that have already taken place such as the setting-up of the Consolidated Bank Ghana.

“In view of the foregoing, and the need to protect the financial sector, Parliament is respectfully requested to consider and approve expenditure of up to Fifteen Billion, Six Hundred Million Ghana Cedis (GH¢15.6 billion) for the bailouts of depositors and investors; and for ensuring that liquidity in the financial system is improved thereby safeguarding the financial sector and the economy.This amount covers all the fiscal interventions in the financial sector starting 2017,” the memo indicated in its conclusion.

This comes at a time when several depositors are agitating for their locked up funds after the collapse of the various financial institutions they invested their monies.

The most recent has to do with the Securities and Exchange Commission (SEC) revoking the licenses of some 53 Fund Management Companies. 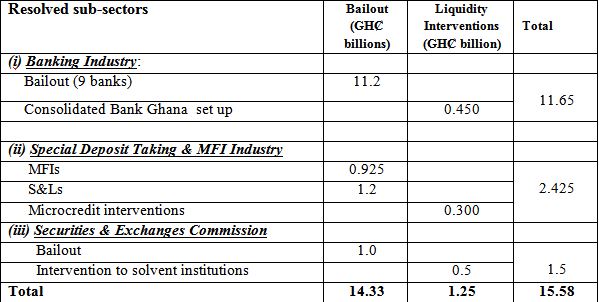 The Finance Ministry in making a case for the approval said the interconnectedness of the financial sector required that some urgent measures are put in place to prevent the sector from plunging into another crisis.

He noted that some measures have already been taken as an emergency step to save the situation.

“In view of the interconnectedness of the sector and the need to prevent the financial system from running into crisis, Government took an emergency step to protect depositors and investors whose funds were locked up in the failed financial institutions. The measures included the issuance of non-marketable securities in 2020 to cover the toxic assets, and make whole depositors in the 9 universal banks that failed, the paying of a capped amount of GHȻ20,000 to validated clients as well as providing liquidity to validated, solvent financial institutions whose funds were locked up with the failed financial institutions to avert a systemic crisis,” the Minister noted in the memo.

Should the legislative body grant the approval, the sector will be expected to hold more liquidity as persons whose funds are locked up in the various collapsed institutions begin to get their monies.

Customers of the various financial institutions whose licenses have been revoked over time have been left frustrated as calls to the institutions and the government to retrieve their monies have not yielded any positive results.

Some have embarked on series of demonstrations, while others have even threatened to boycott the national polls next year if the government fails to come to their aid.

An instance can be seen where hundreds of customers of some defunct Fund Management Companies were left stranded at validation centres in various parts of the country after trooping in to selected branches of the Consolidated Bank Ghana Limited (CBG) as part of processes to retrieve their locked up monies.

SEC selected branches of CBG to receive claims from clients who have their funds locked up at the affected companies.

The banks were tasked to accept relevant documents for the validation of the investment claims.

Also, Gold Coast Fund Management, a member of Groupe Nduom, is one of the collapsed financial institutions.

It struggled just like defunct GN Bank, which was downgraded to a Savings and Loans before its licensed was finally withdrawn by the Bank of Ghana.

After its collapse, aggrieved customers of the institution, as part of efforts to retrieve their locked up monies demonstrated in Accra months ago. 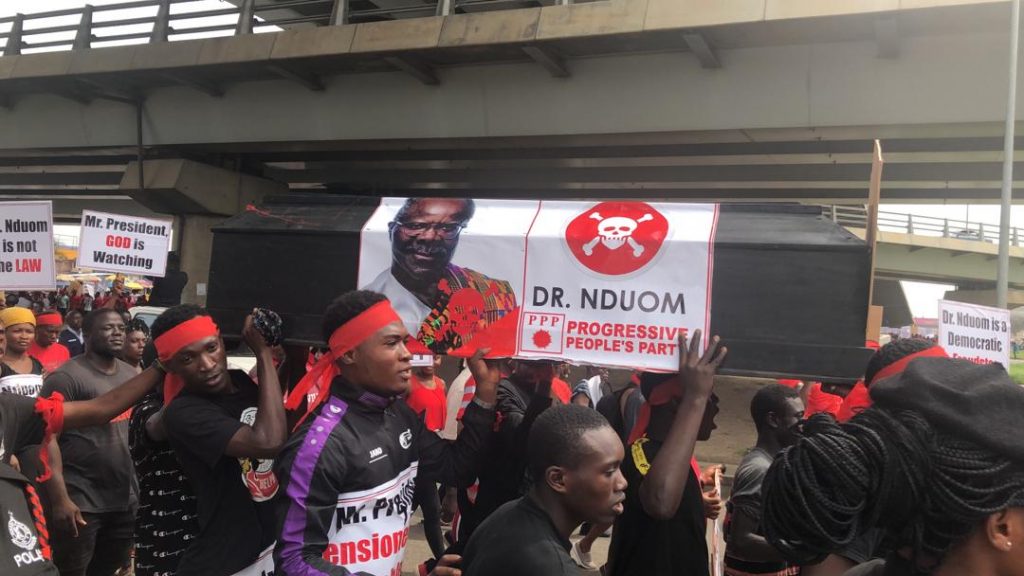 The Ghana Catholic Bishops Conference had earlier appealed to the government to help customers of the defunct banks and savings and loans companies to recover their locked up monies.

Although they justified the move by the Central Bank to revoke the licenses of these financial institutions to save them from greater debt, they expressed concern for the many Ghanaians whose monies are locked up and are pleading on the government to come to their aid.

Meanwhile, the Finance Minister, Ken Ofori Atta has said the government will soon prosecute individuals whose actions led to the banking crisis.

What Are the Leading Reasons for Using Temporary Mail Service?