Marie Yovanovitch, the former U.S. ambassador to Ukraine who was recalled this past May, became teary-eyed as she recounted her sudden firing during a closed-door deposition last month, sources told Fox News.

That may have been the easy part.

On Friday morning at 9 a.m. ET, the 60-year-old diplomat will take the stand again for Day Two of the public impeachment hearings against President Trump — and Republicans are set to hammer her with an aggressive cross-examination related to her previous statements under oath, as well as her reported role in shielding a George Soros-linked nonprofit allegedly connected to documented Ukrainian election interference efforts.

“The former ambassador from the United States, the woman, was bad news,” was how Trump described Yovanovitch to Ukrainian President Volodymyr Zelensky in a July 25 phone call, according to The Washington Post.

“She’s going to go through some things,” the president added ominously.

“The former ambassador from the United States, the woman, was bad news. She’s going to go through some things.”

Shortly before Yovanovitch was set to take the stand, Fox News contributor John Solomon published an explosive March interview with Yuriy Lutsenko, a former prosecutor general in Ukraine. Lutsenko claimed that Yovanovitch had given him a “do not prosecute” list — and Solomon reported that Yovanovitch pressured Ukrainian prosecutors to back off a case involving the AntiCorruption Action Centre, funded by Soros, the liberal megadonor.

The U.S. Embassy under Yovanovitch, Solomon reported, also influenced Ukraine to drop prosecution against top law enforcement official Artem Sytnyk, who was singled out by a Ukrainian court for leaking damaging information about Paul Manafort, then Trump’s campaign chairman, to help Hillary Clinton in the 2016 presidential election. Ukraine courts have ruled that the Manafort financial disclosures constituted illegal election meddling. 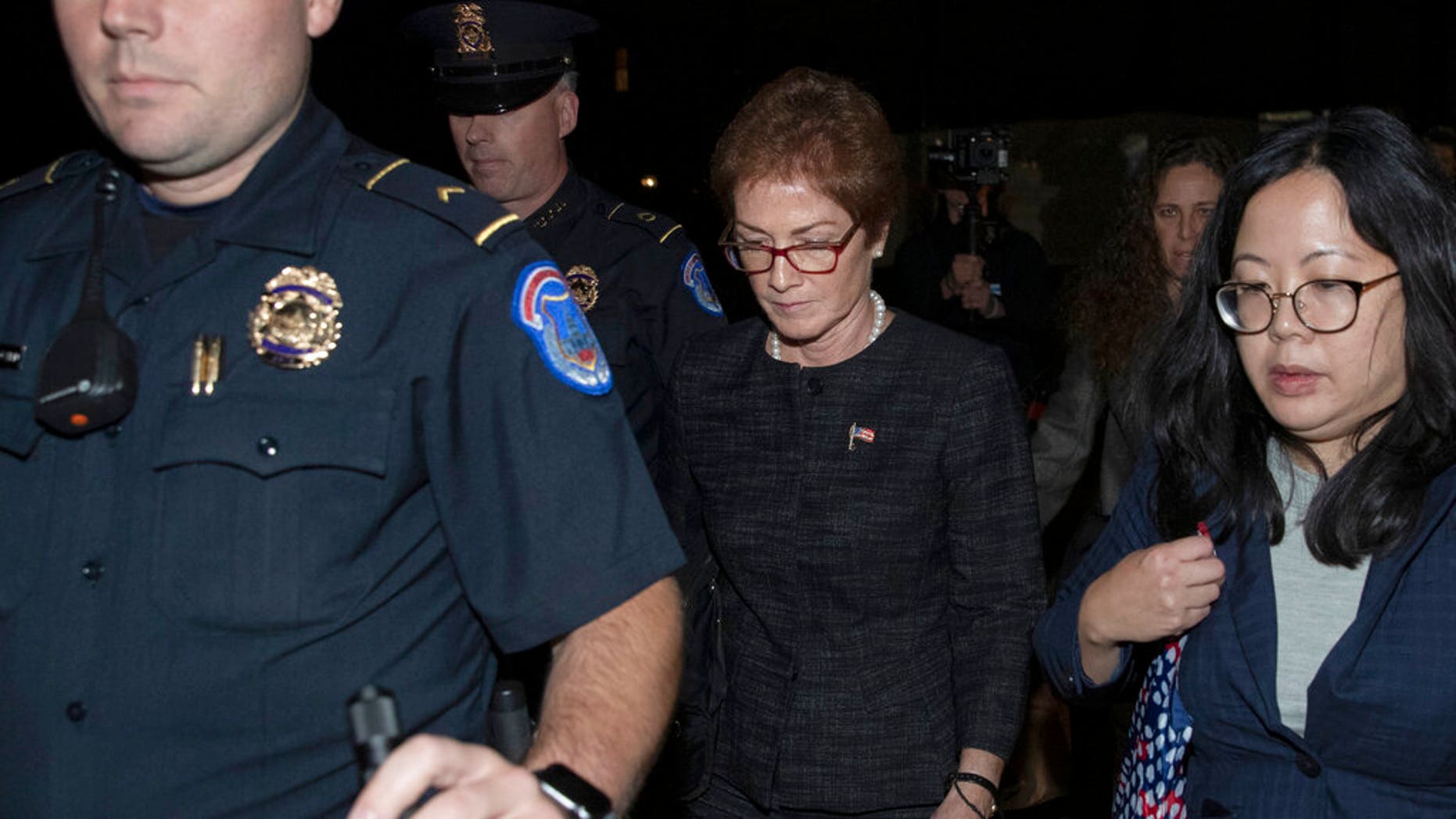 Ukraine systematically worked behind the scenes to boost Clinton, Politico has reported. On his call with Ukrainian President Volodymyr Zelensky in July, Trump specifically asked Zelensky to investigate reports that Ukraine had some involvement in 2016 election interference, before he mentioned taking a look at Joe Biden‘s business dealings in the country.

Though multiple reports, including one from The Associated Press, indicated Lutsenko had recanted his claims about Yovanovitch, Soros said he had not — a revelation later confirmed by The New York Times.

On Friday and beyond, House Republicans plan to sharpen their focus on allegations of Ukraine meddling in the 2016 presidential election, voicing frustration after top diplomats who testified Wednesday said they had no knowledge of the issue. A senior Republican official told Fox News on Thursday that the issue of Ukrainian election meddling would be a “theme” of questions asked by GOP members of the House Intelligence Committee moving forward.

Making matters more complicated for Democrats, Yovanovitch’s testimony was set to come just hours after a bombshell report that a top Ukrainian official said Thursday that U.S. Ambassador Gordon Sondland, a key Democrat impeachment witness, “did not link financial military assistance to a request for Ukraine to open up an investigation into former vice president and current Democratic presidential candidate Joe Biden and his son, Hunter Biden.”

….Ambassador Sondland did not tell us, and certainly did not tell me, about a connection between the assistance and the investigation.” THE FAKE IMPEACHMENT INQUIRY IS NOW DEAD!

Sondland has testified that Trump explicitly told him there were “no quid pro quos of any kind” with Ukraine, including one in which military aid would be conditioned on any politically motivated investigations. (Sondland later amended his testimony, claiming his recollection had been “refreshed,” to say he had come to “understand” from other sources that Trump wanted Ukraine to issue an “anti-corruption statement.”)

Forced out of her job in April, Yovanovitch likely can’t offer much of substance on her own about the central allegations against the president. Democrats leading the impeachment inquiry contend that several months later in the year, Trump pressured Zelensky to investigate the Bidens, and withheld U.S. military aid as leverage.

The timeline will render Yovanovitch vulnerable to the same criticisms that Republicans had for William Taylor and George Kent, the two diplomats who testified during Day One of the impeachment proceedings: That all she can offer is unverifiable hearsay and speculation.

Additionally, Republican lawmakers have argued that Yovanovitch wasn’t entirely truthful in her previous remarks under oath. She communicated via her personal email account with a Democratic congressional staffer concerning a “quite delicate” and “time-sensitive” matter — just two days after the whistleblower complaint that kickstarted the impeachment inquiry was filed, and a month before the complaint became public, emails exclusively obtained by Fox News showed.

The emails appear to contradict Yovanovitch’s deposition on Capitol Hill last month, in which she told U.S. Rep. Lee Zeldin, R-N.Y., about an email she received Aug. 14 from the staffer, Laura Carey — but indicated under oath that she never responded to it. 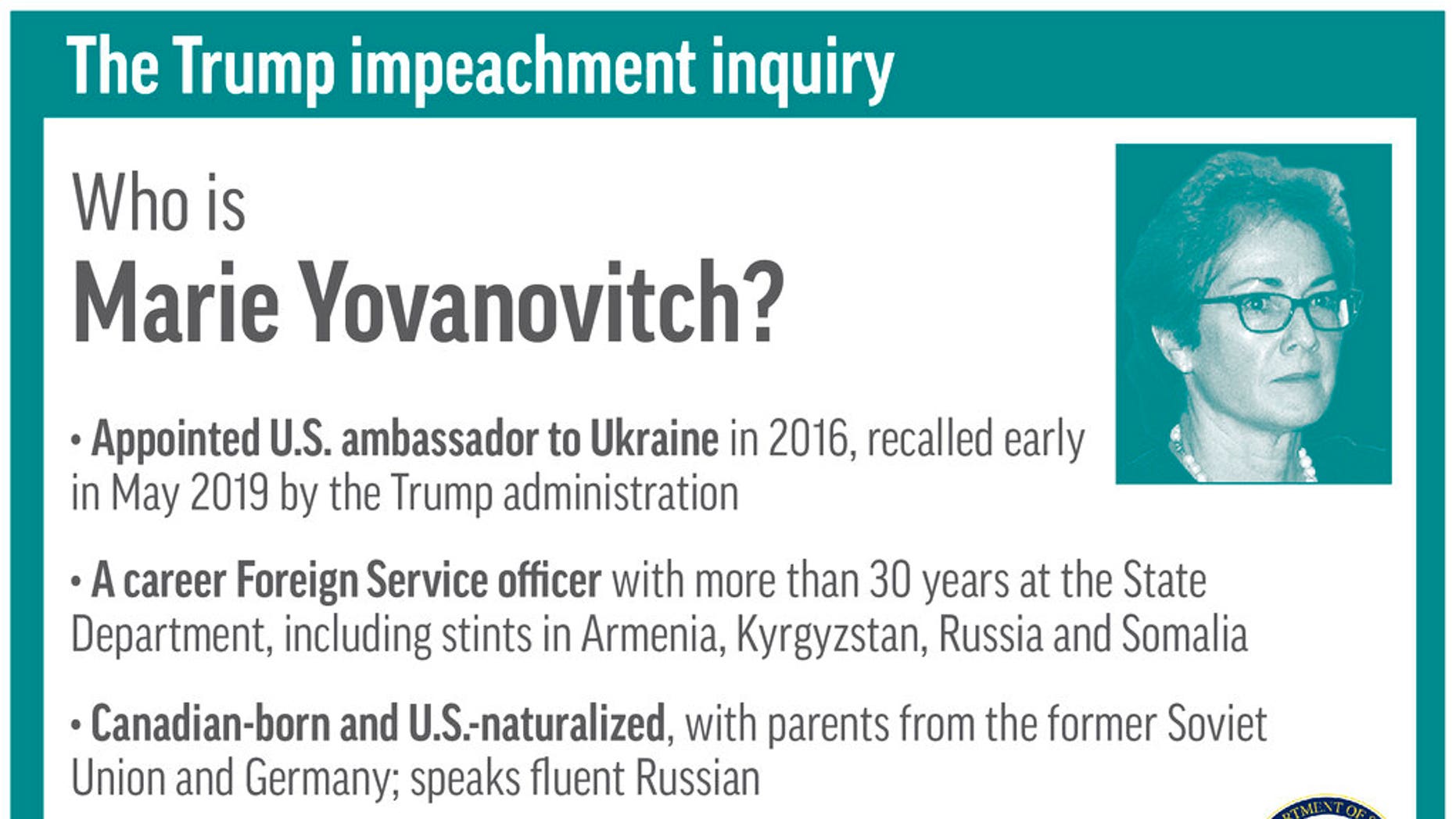 “I specifically asked her whether the Democratic staffer was responded to by Yovanovitch or the State Department,” Zeldin told Fox News. “It is greatly concerning that Ambassador Yovanovitch didn’t answer my question as honestly as she should have, especially while under oath.”

Yovanovitch’s colleagues, for their part, have said she was the target of a smear campaign by the White House, and Trump himself has called the diplomat “bad news.”

Separately during her remarks, Yovanovitch outlined how she lost her job in Ukraine, even as she remains an employee of the State Department.

“You’re going to think that I’m incredibly naive,” Yovanovitch told impeachment investigators. “But I couldn’t imagine all the things that have happened over the last six or seven months. I just couldn’t imagine it.”

Democratic lawmakers are expected to point to the circumstances of her ouster as they try to make their case that Trump, with the help of his personal attorney Rudy Giuliani, mounted an inappropriate pressure campaign to enlist Zelensky in the effort to damage Biden.

“Giuliani also conducted a smear campaign against the U.S. Ambassador to Ukraine Marie Yovanovitch,” House Intelligence Committee Chairman Adam Schiff said at the first public impeachment hearing earlier this week. “A senior State Department official told her that although she had done nothing wrong, President Trump had lost confidence in her.” 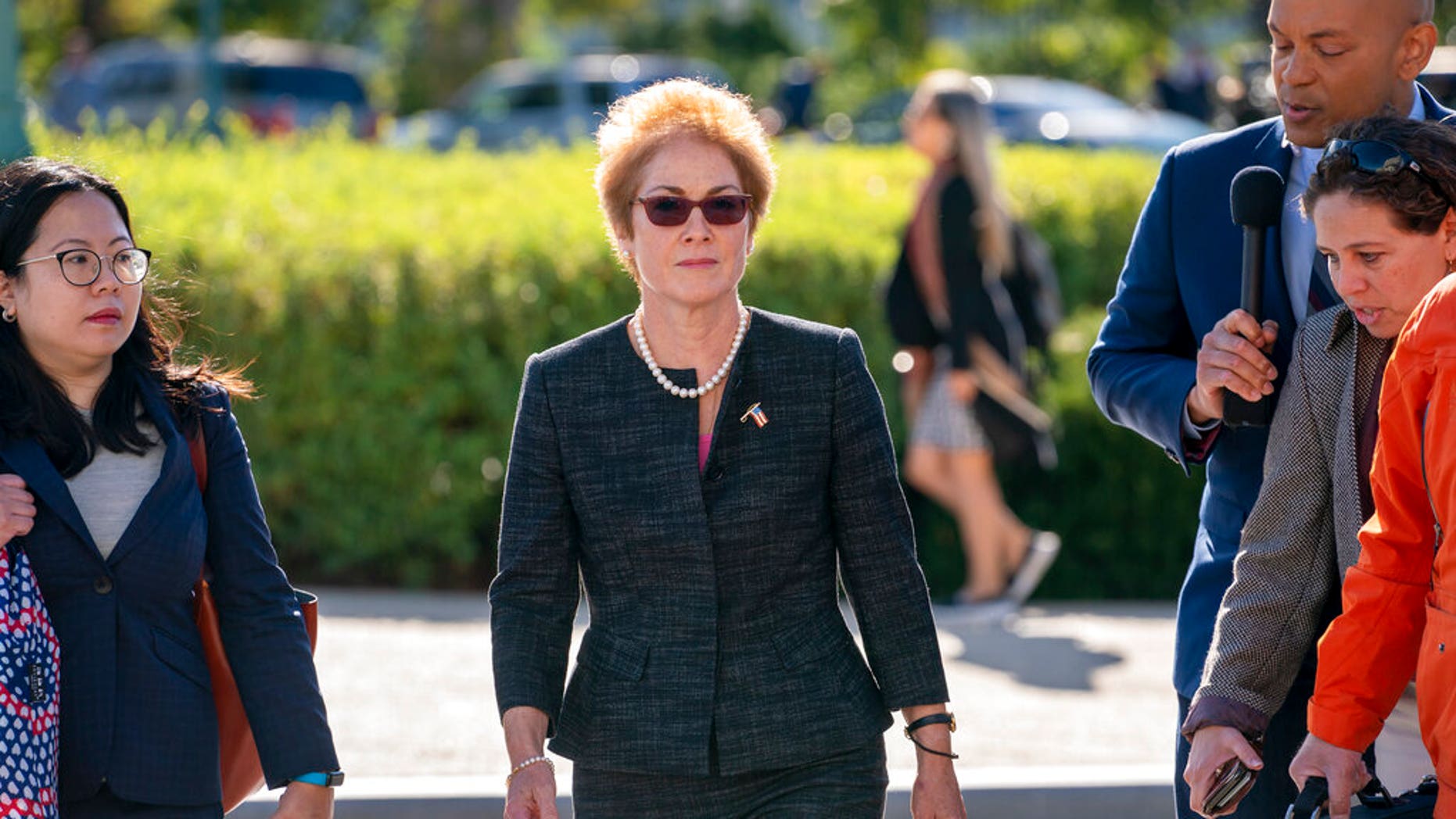 Trump was convinced Yovanovitch was a rogue actor who held a political bias against him, according to a rough transcript of the July 25 call between the president and Zelensky.

At the time of the call, the Trump administration had put a hold on nearly $400 million in military aid to Ukraine and Zelensky and his team were trying to get Trump to commit to a date for a White House meeting.

The intelligence community whistleblower who spurred the House investigation cited Yovanovitch’s ouster as one in a series of events that amounted to an abuse of power by the president.

Meanwhile, House Speaker Nancy Pelosi on Wednesday accused the president of “bribery” by allegedly “threatening to withhold military aid” in exchange for an “investigation into his political rival” — signaling that Democrats were preparing to go all-in on impeachment. The Washington Post had reported Democrats were retiring the “quid pro quo” language in exchange for “bribery” following an internal study showing the word “bribery” resonated more in battleground states.

Yovanovitch, a State Department employee for 33 years who also led U.S. embassies in Kyrgyzstan and Armenia, is well known in diplomatic circles for her measured demeanor and diligence in representing both Republican and Democratic administrations, according to former colleagues.

“Mr. Giuliani was almost unmissable starting in mid-March,” Kent, a deputy assistant secretary of state, testified Wednesday. “As the news campaign, or campaign of slander, against not only Ambassador Yovanovitch unfolded … he was on TV, his Twitter feed ramped up and it was all focused on Ukraine.”

After the ambassador’s recall, Giuliani told Ukrainian journalists that Yovanovitch was pulled from Kiev because she was part of efforts against the president. The former New York City mayor also has said that he told the president there were concerns among Trump supporters that she had displayed anti-Trump bias in private conversations.

During her October testimony, Yovanovitch said she was told that the State Department had been under pressure from Trump to remove her from Ukraine since the summer of 2018.

In late March, the president’s eldest son, Donald Trump Jr., posted a tweet referring to her as a “joker,” and linked to an article from the conservative website Daily Wire that detailed a growing call for Yovanovitch’s ouster.

Yovanovitch raised concerns about the U.S. media reports with Sondland. In response, Sondland encouraged her to tweet her support for Trump on social media.

“He said, ‘You know, you need to go big or go home,’” she recalled. “‘You need to, you know, tweet out there that you support the president.’”

“I just didn’t see that there would be any advantage to publicly taking on a fight with those who were criticizing me in the United States,” she said.

“I just didn’t see that there would be any advantage to publicly taking on a fight with those who were criticizing me in the United States.”

Now Yovanovitch, hardly a marquee name in Washington, finds herself thrust into the spotlight of just the fourth impeachment inquiry in U.S. history.

Nancy McEldowney, a former U.S. ambassador to Bulgaria who has known Yovanovitch for three decades, said the accusations levied by Trump and Giuliani don’t square with the professional envoy whose focus throughout her career has remained on “serving American national interests and supporting the people around her.”

Some GOP senators have talked about contingency plans should the House impeach the president. Specifically, Republicans have floated the idea of holding a lengthy Senate trial early next year, which would potentially jam up several Democratic presidential contenders in the middle of the primary season.

House Democrats, however, could preempt that strategy — perhaps by approving an article of impeachment, then waiting to approve a second resolution formally notifying the Senate of the impeachment until after the primary season is over. ‘I Never Felt Alone.’ Brett Kavanaugh Opens Up About His Confirmation Process
Next Article