OVIDIO Guzman Lopez has been released by Mexico’s security forces after his arrest triggered an all-out cartel war.

Contents
Who is Ovidio Guzman Lopez?Where is he now?Who is El Chapo?

But who is the son of notorious drug lord El Chapo and where is he now? Here’s the latest.

Who is Ovidio Guzman Lopez?

The 28-year-old is one of four children from his dad’s second marriage.

El Chapo had two other wives and at least six more children, according to reports.

Ovidio is the leader of the powerful Sinaloa cartel. He and his older brother Ivan took control of the drug gang after their father was captured and extradited to the US in 2017.

The sons, who are known locally as “Los Chapitos”, were previously believed to have been in a battle with one of the cofounders of the cartel.

The Sinaloa Cartel, also known as the Guzman-Loera Organisation, is an international drug trafficking, money laundering and organised crime gang, which was established in the late 1980s.

Where is he now?

Ovidio was captured in Mexico on Thursday by police months after his dad, Joaquin ‘El Chapo’ Guzman, was sentenced to life imprisonment for drug trafficking and conspiracy.

The 28-year-old has since been released, after his arrest triggered an all-out cartel war.

The news of Ovidio Guzman being taken-in sparked bloody gun battles to erupt in Culiacán, which is the Sinaloa cartel’s stronghold.

Gunfire broke out between gang members and soldiers for several hours, with men wielding high-powered weapons storming the streets.

In a desperate bid to “protect citizens” Mexican security forces released Ovidio Guzman from a house hours after the arrest, according to Reuters. 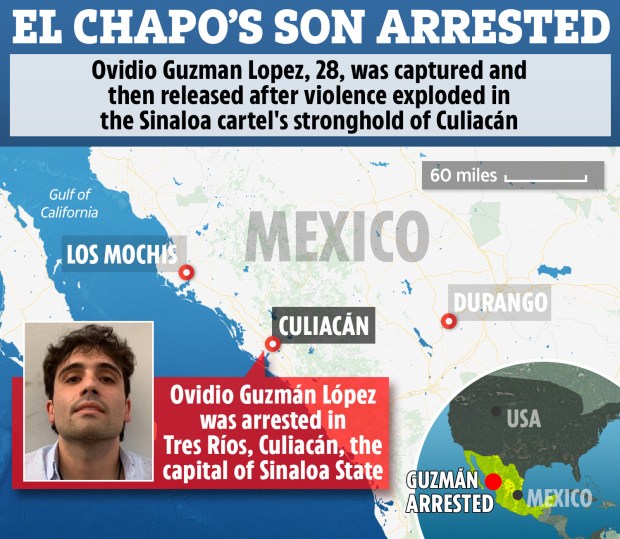 Who is El Chapo?

Joaquin Archivaldo Guzman Loera was known by multiple nicknames, but his most famous was “El Chapo” meaning “shorty” in English.

He ran the Sinaloa Cartel, a criminal organisation named after the Mexican Pacific coast.

El Chapo became the country’s top drug lord in 2003 after the arrest of his rival Osiel Cardenas of the Gulf Cartel.He was considered the “most powerful drug trafficker in the world” by the US Department of the Treasury.

Guzman was believed to be a “principal leader” of an organisation “responsible for importing and distributing more than a million kilograms of cocaine, marijuana, methamphetamine and heroin in the US.”

He also earned the nickname “El Rapido” for for how quickly he transported drugs from Mexico to America for the Colombian cartels.

El Chapo was found guilty of trafficking masses of cocaine, heroine and marijuana while running the Sinaloa Cartel in a US court.

The 62-year-old was transferred to a supermax, super-maximum security, prison in Florence, Colorado.

Having escaped from prison twice before, he will now spend the rest of his life behind bars.

4 people lost their lives in a small plane crash in Washington state. Eight dead in El Chapo shootout in Mexico
Next Article