The Kincade fire is an estimated 1,000 acres and has no containment, according to the California Department of Forestry and Fire Protection. It is being driven by strong north winds and is moving south, a Cal Fire spokeswoman said Wednesday night. It started in a mountainous area near Kincade Road and Burned Mountain Road, according to preliminary information.

An evacuation order is in place for all of Red Winery Road; all of Alexander Mountain Road; California 128 from Geysers Road to River Road, including River Rock Casino in Geyserville; and all roads off River Road.

Residents are advised to leave immediately if they are on or near these roads. 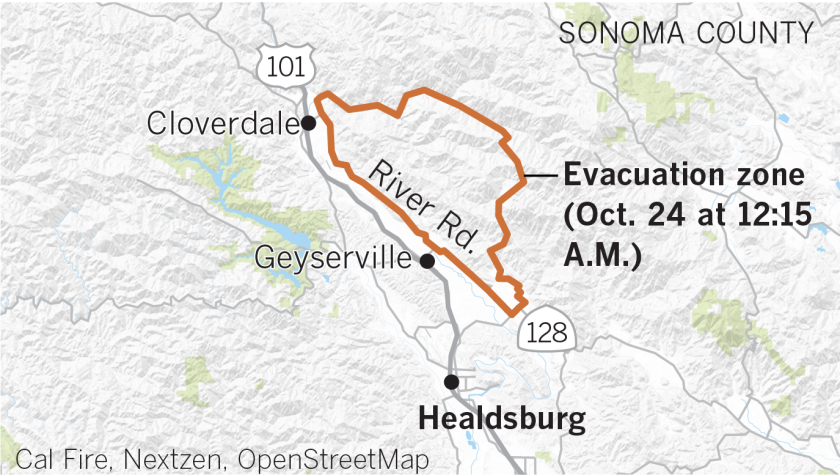 The communities of northern Healdsburg and Geyserville are under an evacuation warning. Officials are advising residents in those towns to be ready to flee.

The area around the blaze is seeing severe fire weather with sustained winds of roughly 50 mph and gusts as high as 76 mph, said National Weather Service meteorologist Matt Mehle. Temperatures around midnight were about 70 degrees, and humidity levels were about 10% to 15%. Wind speeds in some of the valleys around the fire were lower, around 25 mph.

Mehle said that based on cameras and satellite data past midnight, he was continuing to see what firefighters call rapid rates of spread that can contribute to potentially extreme fire behavior. Based on his observations, the overall footprint of the fire is moving from the northeast to the southeast.

A video of the fire posted on Facebook by the Geyserville Fire Protection District was narrated by Capt. Joe Stewart from the top of Pine Flat Road on a fire trail, looking north. The fire was burning northwest, whipped by winds of 40 mph to 50 mph, perhaps 60 mph.

“The fire is moving at a dangerous rate,” Stewart said. “If you are woken by emergency alerts, please heed those warnings and evacuate.”

State Sen. Mike McGuire (D-Healdsburg) said on Twitter that “significant resources from across the region are responding – Engines, air attack, personnel and bulldozers.”

UCLA climate scientist Daniel Swain said on Twitter that the fire “may well burn all the way toward east side” of the Alexander Valley, “where [a] nearly continuous line of vineyards will hopefully act as broad firebreak. 65mph+ winds in hills, but nearly calm in valleys.”

The fire comes two years after a series of blazes devastated Santa Rosa and other wine country communities, leaving dozens dead and thousands of homes lost. Residents of Santa Rosa were on edge early Thursday morning with the fire burning to the north.

The fire comes amid a night of intense winds, with gusts topping 50 mph in areas around the fire.

Large swaths of California are facing red-flag fire danger this week because of hot temperatures and strong winds. That has prompted preventive power outages in many areas, including parts of wine country.

More than half a million utility customers could lose power this week.

Pacific Gas & Electric Co. on Wednesday shut off power to customers in the Sierra Nevada foothills about 2 p.m. An hour later, counties in the north San Francisco Bay Area began to lose service. By 1 a.m. Thursday, portions of San Mateo and Kern counties will also be in the dark. In total, 179,000 customers are expected to have their power cut.

PG&E said in a statement early Thursday morning that the company was aware of the Kincade fire in Geyserville and had no further information, deferring to Cal Fire for additional questions.

The Kincade fire is near the utility’s power shut-off footprint, and the company said late Wednesday night it was working to gather more information. Almost 28,000 customers are without power in portions of Sonoma County, which was de-energized about 3 p.m.