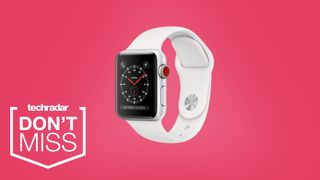 The best-ever Apple Watch 3 deal is back in stock – although you’re not going to get it easily. The white, 38mm version of one of our best wearables is down to $129 – a simply amazing price for what you’re getting – but you’ll need to seek it out in a local store.

That’s right: while we’re hearing a few reports that you can still snag it online if you’re lucky, the Apple Watch 3 is only going to be this low price if you’re willing to walk to a local store.

Before that, if you do want the very best Apple Watch deal online right now, we’d suggest checking out the below – it’s nowhere near as good, but still a saving over at Best Buy:

If you want more of the best Black Friday 2019 deals around at the moment, then please see our dedicated hub to get the best deals on everything from TVs and laptops to kitchen appliances and toys.

Some of the best prices we’re seeing are on smartwatches, including the Apple Watch and various Android wearables, and we’ve picked out some of the best deals at US retailers below. (Not in the US? Scroll to the bottom of the page to see today’s best Apple Watch 3 deals in your region.)

Apple Watch 4 GPS, 40mm: $299 at Best Buy
You can save $50 on the Apple Watch 4 at Best Buy. The series 4 smartwatch features GPS technology and continuous heart rate monitoring is available in a white, black, or pink sport band.
View Deal

Pick up a new Apple Watch 5 GPS-only 40mm for $30 off at Costco. You can save the same amount on the larger 44mm option by heading here. This deal is good from now until December 24.View Deal

Apple Watch 5 GPS + Cellular 40mm $455 at Costco
The Apple Watch 5 Cellular-connected 44mm is $30 off at Costco. In addition to its always-on display, this newest Apple Watch even has its own App Store, allowing you to download apps without going through an iPhone. This deal applies to the larger 44mm Cellular version here, and is good from now until December 24.View Deal

Android users, don’t despair. If you’re after a smartwatch that isn’t an Apple Watch, we’ve got you covered too. Here are some of the best Black Friday smartwatch deals you can get today:

The original Fitbit Versa remains a solid smartwatch with a full-color display, waterproof body (up to 50m), 3-4 day battery life, and all the fitness modes and functionality you’d expect from a Fitbit device.View Deal

This discount chops $50 off Samsung’s smartwatch. The Galaxy Watch Active2 can track your steps, heart rate, sleep, and many fitness activities. it’s ready for a swim, too, thanks to its water resistance.
View Deal

Garmin Instinct Smartwatch | Graphite: $199.99 at Best Buy
A smartwatch for the outdoors adventurer. Garmin brings a more rugged standard of wearable tech to the table with the Instinct, a chunky watch coated with a reinforced polymer that makes it ideal for those who prefer hiking up a mountain to running on a treadmill.View Deal

Samsung Galaxy Watch | 46mm | Silver: $269.99 at Best Buy
The bulkiest version of Samsung’s flagship smartwatch is on sale too, with Best Buy matching Amazon’s discount and throwing in free US delivery too. This model has a nice large clockface/screen protected by Corning Gorilla Glass for added durability.View Deal

TechRadar is scouring every retailer and rounding up all the top deals over the Black Friday period, and we’ve put all the best Black Friday deals and Cyber Monday deals in easy-to-navigate articles to help you find the bargains you’re looking for.

Shop more fantastic offers with our roundup of the best Walmart Black Friday deals that are happening now.

If you’re not in the US, you can see today’s best deals on the Apple Watch Series 3 where you are below.