Everton forward Richarlison tried to replicate Lionel Messi’s famous shirt holding goal celebration on Wednesday night but the Brazilian got it completely wrong, holding the shirt the wrong way round.

Messi famously took his shirt off after a late winner in a Clasico game against Real Madrid. The Barcelona superstar held up the back of his shirt to the crowd so they wouldn’t forget his name, like anyone could.

On Wednesday night Richarlison attempted the same move after his 88th minute goal put Everton 4-2 up against Lincoln City in the Carabao Cup, only he held it the wrong way round.

This against Lincoln City…absolute banter club

Feels like : I am a superstar and I know it! :joy:

Doing that celebration to win a heated Clasico is a bit of a baller move but attempting it when you’ve scored to put your team two up against League One side Lincoln in the 2nd round of the Carabao Cup is quite something else.

Lincoln had taken a very early lead with Harry Anderson scoring after just 21 seconds to put the third tier side ahead.

Lucas Digne’s brilliant free kick after 36 minutes but the Premier League side level and they were ahead after a 59th minute penalty from Gylfi Sigurdsson, which resulted in a goalmouth shoving match between players from both sides.

Danny Cowley’s side did get back level through a brilliant strike from Bruno Andrade, with a cracking volley in the area, on 71 minutes.

It took just four minutes for the Toffees to stop the game going to penalties as Alex Iwobi put Marco Silva’s side back in the lead on 81 minutes.

With time running out Richarlison made sure that Everton would be in the hat for the third round, where they later drew Sheffield Wednesday away, but he messed up his celebration.

Ryan is a writer for SPORTbible. He covers all sport from football, formula one, cricket, rugby, tennis, athletics, mma and wrestling. He obviously hates YOUR football team and has no interest in synchronised swimming. Sports News: UFC Fall of Famer BJ Penn Knocked Out Cold In One Of Two Bar Fights In Hawaii
Next Article 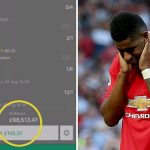