These days backup quarterbacks hop in the transfer portal at the first signs of trouble.

It wasn’t always that way, though.

The Iron Bowl of 1993 was special for a couple reasons, but one aspect of that memorable game, which preserved coach Terry Bowden’s perfect season, is relevant to this year’s iteration of Auburn vs. Alabama. A gritty backup sophomore quarterback named Patrick Nix won it for the Tigers after Stan White left the game with a knee injury.

The game’s memorable play was a 35-yard touchdown pass on 4th and 15 from Nix to Frank Sanders. Tommy Bowden was the Tigers’ offensive coordinator, and Jimbo Fisher was the quarterbacks coach.

Nix’s son, Bo, will play in his first Iron Bowl on Saturday at Jordan-Hare Stadium, but he has slightly more experience than his father at this point in his college career. What a season to be a true freshman quarterback for the Auburn Tigers. 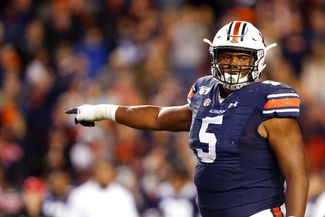 This time last year, Nix was preparing to play current Alabama defensive tackle D.J. Dale of Clay-Chalkville High School in the semifinals of the state playoffs. Now Nix is walking into the Iron Bowl at Jordan-Hare Stadium having already played four teams ranked in the Top 11 of the current College Football Playoff rankings: No.6 Oregon, No.11 Florida, No.2 LSU and No.4 Georgia.

No.15 Auburn knocked off Oregon to begin the season, and that come-from-behind upset has turned out to be one of the more nationally relevant results of the college football season. This Iron Bowl will be hugely significant out West, where Oregon plays Utah in the Pac-12 championship game on Dec.6. No.5 Alabama is one spot ahead of Utah in the College Football Playoff rankings after Arizona State upset Oregon last week. 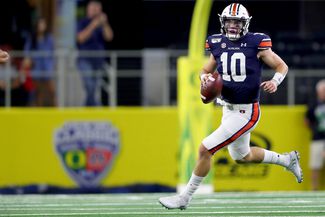 For Auburn, its victory against Oregon is just more evidence of a schedule that makes Alabama’s season seem like a breezy and comfortable day at the beach by comparison.

Consider this for perspective: Alabama junior quarterback Tua Tagovailoa has started against five Top 5 teams in his career at Alabama, including the 2018 SEC championship game and the 2018 College Football Playoff. The Iron Bowl marks the fourth start this season for Nix against a Top 10 team. Oregon was ranked No.11 to begin the season, and Texas A&M was ranked No.17 when Nix went into College Station and beat his dad’s old position coach 28-20.

Nix has faced the most difficult schedule in college football this season, and he is better for it. Now he’ll be the most seasoned quarterback on the field for his first Iron Bowl. Who saw that coming?

Alabama quarterback Mac Jones, playing for the injured Tagovailoa, is a redshirt sophomore, but his only meaningful snaps have come in starts against Arkansas and Western Carolina. Weakness are revealing themselves elsewhere in Alabama’s crimson armor, too. The defense is thin, and dotted with freshmen at key positions. 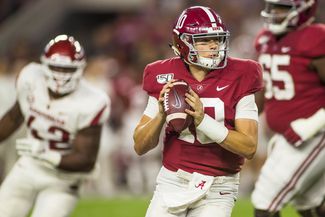 An offensive mind like Gus Malzahn should be able to find space in Alabama’s defense for Nix to exploit. After a long season with a steep learning curve, the freshman quarterback has a real chance, in other words, of beating Nick Saban and Alabama in his Iron Bowl debut.

Auburn is out of the playoff hunt after its loss to Georgia, but Nix can now ruin Alabama’s chances of returning to the College Football Playoff.

Playing spoiler isn’t the only prize for Auburn, though.

He’s not getting fired if he loses (most likely), but this Iron Bowl is an important moment for Malzahn, who parted ways with yet another offensive coordinator before this season to call plays for Nix. Malzahn might have more to prove, and more to gain, in this Iron Bowl than at any other time during his tenure with the Tigers.

He has had the impossible task of coaching the Tigers during the Saban Era, but now Alabama is vulnerable and the Tigers’ coach has a young and talented quarterback to build a team around and sell to recruits. 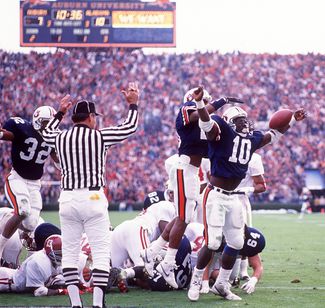 This game feels like a Rubicon in Auburn’s path to reaching its full potential, and the Tigers believe strongly they have the financial backing and the fanbase to achieve sustained success on the level of ACC powerhouse Clemson. Is the man currently coaching Auburn the person to get them there? He has detractors, but Malzahn already was the only coach in the SEC with a victory against Saban before this season. This would give him three, and not even Dabo Swinney can claim that. Latest Sports News: Pre-snap motion has given the Ravens an edge. Why don’t more teams use it? – ESPN
Leave a comment Leave a comment