The Auditor-General has faulted the GETFUND for its haphazard doling out of scholarships without following its own laid down procedures.

In a report littered with a litany of infractions, the Auditor-General said it found more than 1,200 beneficiaries who did not submit basic documents such as admission letters.

But it did not stop the GETFUND administrator Sam Garba from approving financial aid to the applicants.

The report speculates that it is possible these applicants “searched for schools after they had been awarded the scholarships.”

According to GETFUND’s own guidelines for approving financial aid, an applicant was required to submit seven documents.

But in a staggering example of poor management, “GETFund did not follow the guidelines purported to have been obtained from Scholarships Secretariat, neither did they comply with best practices used by recognised scholarship awarding institutions such as the GNPC Learning Foundation in granting scholarships.”

Of the 3,112 applicants who obtained scholarships, only 12 submitted a complete set of required documents. 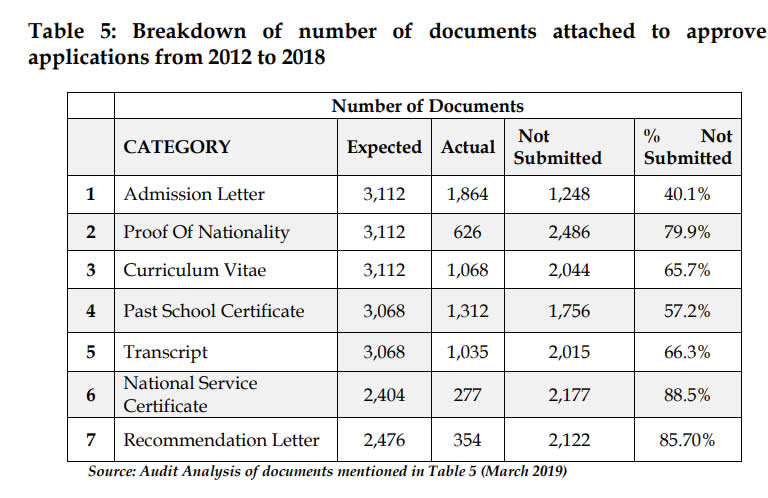 For those required to submit recommendation letters, several of them simply submitted notes “notes on complementary cards from Members of Parliament, Ministers of State, presidential staffers, heads of faculties and other influential
Ghanaians.”

The Auditor-General’s report covered the activities of GETFUND from 2012 to 2018. The report expressed concern that at least 80% of scholarships were granted to finance education abroad in contravention to the stated aims of the law.

The GETFUND Act prioritises funding for education in Ghana.

The performance audit report on the GETFund Secretariat condemned the former administrator for abusing his powers.

“The Administrator solely approved or rejected an application for scholarship. There was no panel to interview candidates neither did he formally interview applicants to determine their suitability for selected courses of study.”

It said the GETFUND secretariat “failed to establish a robust selection process to
ensure scholarships were granted to Ghanaians meeting some predetermined
evaluation criteria.”

“The selection process for scholarship award by GETFund Secretariat was non-structured, unfair, dominated by one person and porous. This allowed the Administrator to select any applicant of his choice to benefit at the expense of other Ghanaians who might have been brilliant and in need of the award.”

The report also listed the negative effects of poor scrutiny and the failure to conduct a robust selection of applicants for an award.

Auditor General indicated in the report that it may disallow the expenditures by GETFund Secretariat in the management of foreign scholarships which he deems
were contrary to law and surcharge the persons involved.

GETfund: Adwoa Safo, NAPO not awarded scholarships under our administration No change in JHS, SHS duration; NaCCA clarifies
Next Article