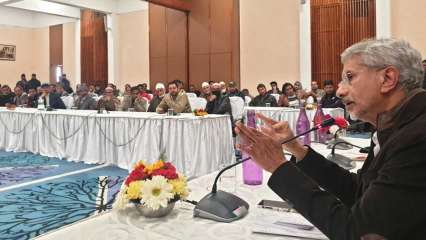 India’s External Affairs Minister S Jaishankar on Monday (March 9) arrived on a surprise visit to Kashmir where he met parents of those students who are stranded in Iran after the outbreak of coronavirus. This is also the first visit of the minister after taking over the office in May last year.

Jaishankar landed at the Srinagar airport in the morning and directly went to meet the family members who according to them were assured about their safe return.

“The minister assured us that students will be brought back safely but we are worried about our children,” a concerned parent told WION after meeting the minister. He said the minister told them the first priority is to bring back pilgrims and then the students.

Around a hundred parents from different districts of the valley had arrived to meet Jaishankar. The meeting lasted for an hour after which he went to the regional passport office in Srinagar where he according to sources directed the officials to help the stranded with passport issues.

“We have requested the minister to take all the necessary precautions to bring them (students) back soon. The virus is spreading fast, so we are worried,” said Nazir Ahmad, whose kid is studying in Iran.

The parents also raised the demand to increase the medical screening centers, so that the evacuation is timely.

Iran has reported 49 new deaths from novel coronavirus within 24 hours since the outbreak in the country. This has taken the death toll in the Islamic republic to 194 with 6,566 confirmed cases.