The Justice Department argued in court filings Thursday that GOP-backed laws related to the rights of transgender youth in West Virginia and Arkansas are unconstitutional, setting up a likely legal clash in the coming months.

Federal attorneys asserted in a statement of interest filing that a West Virginia law banning transgender youth athletes from participating in women’s sports was unconstitutional under the Fourteenth Amendment and Title IX of Education Amendments of 1972. The Justice Department argued the law should be overturned.

“The United States has a significant interest in ensuring that all students, including students who are transgender, can participate in an educational environment free of unlawful discrimination and that the proper legal standards are applied to claims under Title IX and the Equal Protection Clause,” the DOJ said in its filing.

The Justice Department made a similar argument in a statement of interest on a lawsuit related to a law in Arkansas, which banned “gender-affirming care” such as hormone therapy and puberty blockers for transgender youth. Republican Arkansas Gov. Asa Hutchinson vetoed the law, dubbed the “Save Adolescents from Experimentation (SAFE) Act,” but the state legislature overturned his decision. 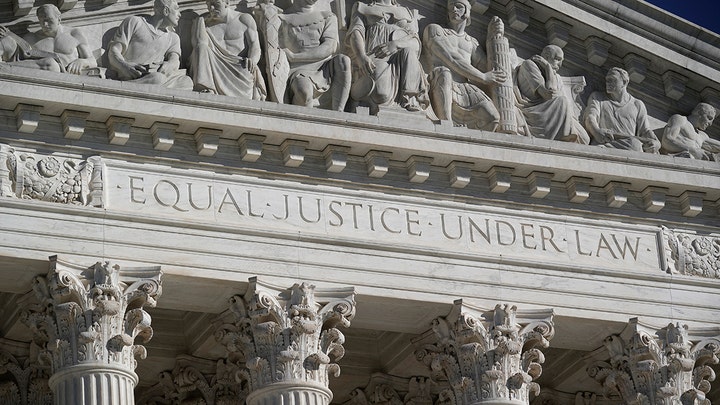 As in the West Virginia filing, federal attorneys said the law violated the Equal Protection Clause of the Fourteenth Amendment.

“Prohibiting medically necessary care in the manner proscribed by Act 626 amounts to intentional discrimination against transgender minors on the basis of sex,” the DOJ said.

Both statements of interest were filed in response to lawsuits backed by the American Civil Liberties Union. Critics of the laws enacted in West Virginia, Arkansas and several other states argue they are discriminatory and inhumane.

In January, President Biden signed an executive order requiring public schools to allow transgender athletes to participate on sports teams that align with their gender identity. The order indicated schools that do not comply could lose their federal funding under Title IX, which bars sex-based discrimination.

Earlier this week, Biden’s Education Department said transgender students were protected under Title IX. The Trump administration argued that gender identity was not protected under the provision. Following the fatal shooting at a Chicago tourist attraction, a teenager was charged with murder.