President Nana Addo Dankwa Akufo-Addo is elated that a demonstration exercise organised by some opposition political parties including the National Democratic Congress (NDC) against the compilation of a new voters’ register recorded no casualties.

Speaking at the 71st New Year School at the University of Ghana on Tuesday, Nana Akufo-Addo complained that the situation was not the same in the past, citing the Let My Vote Count demonstration held in September 2015 which turned violent after police officers unleashed mayhem on protesters.

“Before I conclude, let me state a Ghanaian irony. Five years ago, we had demonstrations in Accra calling for a new, credible register, in which some citizens were maimed and brutalized. Indeed, a citizen, young Justice Adzakuma, lost his eye and died last year. May God bless his soul. Today, we are having peaceful demonstrations in Tamale, this time protesting against the decision of the Electoral Commission, whose constitutional remit it is to compile an electoral register, to have a new, improved register. Fortunately, in this new era, there are no casualties. God bless Ghana,” he said. 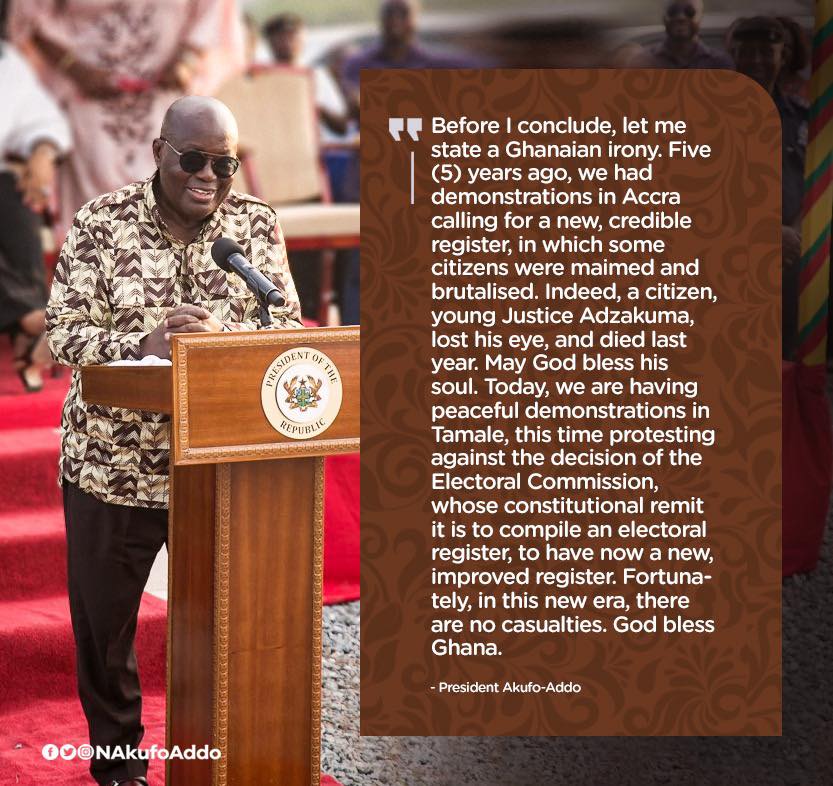 The decision by the Electoral Commission (EC) to compile a new voters’ register has dominated political conversations in the country.

Whereas eight political parties including the NDC are against the EC’s decision, 13 others which includes the governing New Patriotic Party (NPP) supports the elections management body.

Over the weekend, about eight political parties opposing the new voters’ register took to the streets of Tamale in the Northern Region to express their disappointment against the move by Electoral Commission (EC) to compile a new electoral roll ahead of the 2020 general elections.

They have vowed to stage such exercise in Kumasi and Accra in the coming days.

Coalition of Political Parties for ‘YES’ to a new register

The parties, who as a group is known as the Coalition of Political Parties for ‘YES’ to a new register, believe the EC has made a solid case for a new register in terms of cost, time and credibility.

Demand for new voters’ register in 2015

In 2015, the New Patriotic Party (NPP) which was then an opposition party called for the compilation of a new voters’ register, describing the existing one as lacking credibility.

They claimed that the register was bloated hence the need for a new one to be compiled.

Current Vice President Dr. Mahamadu Bawumia at the time alleged that there were more than 76,000 Togolese nationals registered in Ghana to vote.

However, these calls were downplayed by the National Democratic Congress (NDC) which was in power at the time.

The NPP then decided it will join the planned protest by some political pressure group known as Let My Vote Count to demand a new voters register.

However, the protest turned chaotic when some of the members of the pressure group reportedly veered off the approved route.

The Police used rubber bullets, water cannons and tear gas on the protestors after efforts to compel them to adhere to the approved routes failed.

The NPP then tasked the Police to and bring to book its personnel that unleashed mayhem on pro-opposition groups who were demonstrating over the voters’ register.