Celine Dion is thanking family, friends and fans for their outpouring of support following mother Therese Dion’s death at the age of 92 last month.

The French-Canadian songstress took to social media to express her gratitude with a heartfelt message on Thursday.

Sharing a striking black and white portrait of her mother, the It’s All Coming Back To Me Now vocalist, 51, wrote: ‘On behalf of my entire family, I would like to thank all of you for your expressions of sympathy, which have touched us very deeply.’

Celine – who shared the message in both English and her native French – went on: ‘If you wish, you can write a note or make a donation on the Fondation Maman Dion website. Helping children in need, will help us to heal.’

Dion has been staying strong since the death of her mother January 16.

Just one day after losing her beloved mom, the singer was back on stage in Miami.

There, she opened up about Therese’s death while paying tribute to the late mother-of-14. 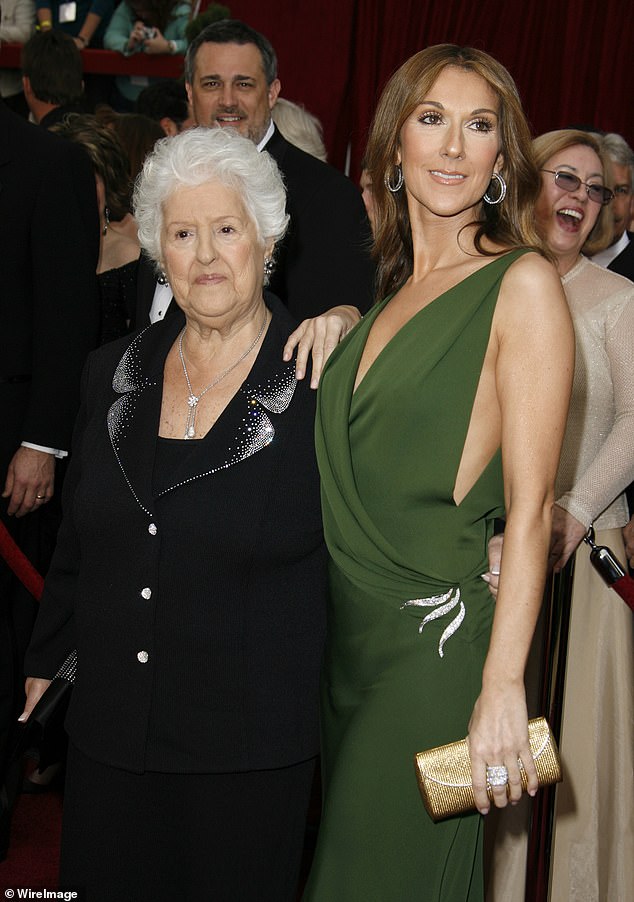 ‘I’m pretty sure that you heard the news about my mom passing away early this morning,’ Celine began, which set off a loud collective sigh from the audience.

She then changed the somber tone to a roar of cheers by assuring fans: ‘But I’m doing okay and we’re all okay.’

Fighting back tears, Dion went on to talk about how her mother was ill for quite awhile, and that the family knew she wouldn’t be with them for long.

She went on to reveal that the family got a call from nurses two days prior to tell them that ‘her time was coming soon.’

‘So last night I joined my brothers and sisters in Montreal, and I spent the evening at her bedside. We told stories. We sang songs. We hugged each other and we said our goodbyes,’ she revealed, which pulled at the heartstrings of the crowd.

‘We are pretty sure that mom waited for us to be all together one more time.’

Thérèse Tanguay Dion was surrounded by family at the time of her passing, according to Radio-Canada.

The Canadian, who was nicknamed Maman Dion, worked as a television host and was also a philanthropist.

Last summer it was announced by the family that Tanguay had been battling health issues and was suffering from memory loss as well as hearing and vision impairment.

Celine was quick to share a tribute to her mother.

The star posted a black-and-white photo from her childhood on Instagram with all of her siblings. The caption read, ‘Maman, we love you so much… We dedicate tonight’s show to you and I’ll sing to you with all my heart. Love, Céline xx…’ The photo was taken by Richard Gauthier, Dion noted.

Quebec Premier François Legault tweeted out his condolences upon the announcement.

‘A remarkable woman, so generous, so loving, who devoted her whole life to the benefit of her family,’ he wrote. ‘Our big Québécois family mourns her passing.’

Celine often took her mother with her to her performances and was photographed with her at red carpet events.

And Dion also posted photos of Thérèse with her on private jets around the world, which she posted to Instagram.

On Mother’s day in 2019 she shared her love for her mom: ‘Now more than ever, I realize the importance of a mother’s role. Not only did you give me life, but you also wrote my destiny. I love you Mom,’ she wrote.

At first her husband did not want to have children.

But she talked him into it and they went on to have a stunning 14 kids – Celine is the youngest.

Thérèse was a big champion of Celine’s singing career.

The matriarch, who played the violin and accordion, encouraged her daughter to sing at home and and even wrote a song for her – It Was Only A Dream – which she sent to René Angélil to help get published.

And Celine went on to date then wed René Angélil in 1994.

They had three children together: Rene Charles, aged 18, and twins Nelson and Eddy, aged nine.

Celine has been vocal about her mourning. She shared a tribute to Angélil on the four year anniversary of his death.

‘There is not a day that goes by without me thinking about your beautiful smile. We miss you, thank you for watching over us my love. I love you. Céline xx…’ said the 51-year-old songbird.