Temperatures are likely to soar again on Friday, prompting fears that two fires could form a new “mega blaze”.

At least 25 people and millions of animals have died since September.

About 200 homes have been destroyed in neighbouring Victoria, adding to more than 100 lost in other states.

The Insurance Council of Australia estimated the damage bill had reached A$700m (£370m; $485m), but said it expected the cost to rise significantly.

On Monday, the Bureau of Meteorology warned that visibility in Melbourne was less than 1km (0.62 miles) in many parts of the city and its surroundings.

Rain has fallen in NSW and Victoria and temperatures have dropped – but officials have warned that blazes will “take off” again.

They fear large blazes in both states could merge, creating unpredictable fire fronts and posing heightened danger to lives and homes. 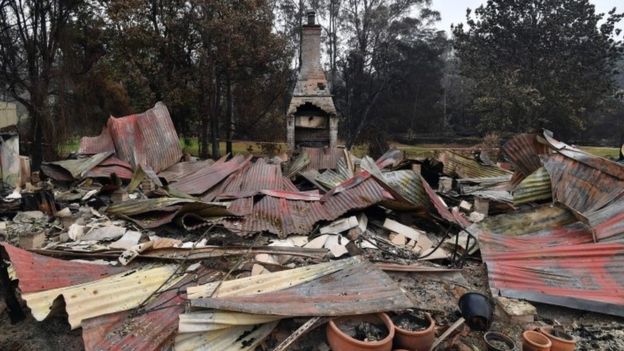 “There is no room for complacency,” NSW state Premier Gladys Berejiklian warned on Monday.

Hundreds of properties were destroyed at the weekend. Rural towns and major cities saw red skies, falling ash and smoke that clogged the air.

The easing of conditions has allowed valuable supplies to be taken to affected areas.

The army said it had sent supplies, personnel, and vehicles to Kangaroo Island near the city of Adelaide in South Australia. The island has been devastated by bushfires, with two people killed last week.

The NSW Rural Fire Service said it had more than 2,600 people deployed on Tuesday to bolster containment lines between fires and populated areas.

Tuesday also saw the funeral of a firefighter who died on 19 December in an accident on the way to a major blaze near Sydney.

Andrew O’Dwyer was killed alongside his colleague Harvey Keaton when their fire truck hit a fallen tree.

Dozens of fellow firefighters formed a guard of honour outside a church in the New South Wales capital. 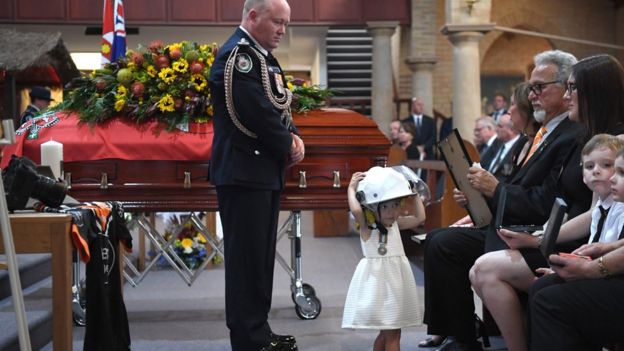 Mr O’Dwyer was posthumously given the Commissioner’s Commendation for extraordinary service and bravery, the highest award that can be given to NSW firefighters.

Is the government doing enough?

On Monday, after warning the crisis might go on for months, Prime Minister Scott Morrison said A$2bn ($1.4bn; £1.1bn) would be committed to recovery over the next two years.

He announced the creation of a recovery agency to help those who have lost homes and businesses in the fires.

The government has also pledged some compensation for volunteers who take leave to fight fires, and more money for waterbombing aircraft.

On Tuesday, Mr Morrison thanked both US President Donald Trump and British Prime Minister Boris Johnson on Twitter for their support, saying the US and Australia were “great mates” and that the UK was a “great friend”.

But the Australian prime minister has faced fierce criticism for his response – including for taking a holiday to Hawaii during the crisis. Critics have also accused him of underplaying the role of climate change.

How are celebrities helping?

At the weekend, a fundraiser launched by comedian Celeste Barber for fire services in NSW raised more than A$35m in just 48 hours.

A number of celebrities have also donated money to support firefighting efforts in recent days – among them Australian actor Chris Hemsworth who on Tuesday posted a video saying he donated one million dollars.

He also called on others to donate to the “firefighters, the people on the frontline, the people who have suffered, the communities that have taken a hit and who are in desperate need of our support”.

Other celebrities who donated money include US singer Pink, and Oscar-winner Nicole Kidman, who pledged $500,000 each.

On Monday, pop star Kylie Minogue tweeted her family had “donated $500,000 towards the immediate firefighting efforts and the ongoing support which will be required”.