Authorities say the baby girl was taken under circumstances that lead police to believe she is in imminent danger of serious harm or death.

Authorities have issued a New York state Amber Alert after they say a baby was taken by her biological father without permission in Manhattan early Monday.

The Amber Alert for 9-month-old Mi Angel Gaines was activated just after 12:30 p.m., nearly 10 hours after the child was thought to have been kidnapped on Eighth Avenue in Harlem.

Gaines was last seen wearing a red, white and blue onesie. She is about 15 inches tall and 19 pounds with long black hair and brown eyes.

MISSING❗️#NYPD needs your assistance locating the child pictured below⬇️. She was last seen in a stroller in front of 2433 FDB(8th Ave) #Harlem, wearing a red, white & blue onesie. Child was taken by her biological father Antonio Armstrong⬇️without permission. Call???? 212-690-6315 pic.twitter.com/bB19NLUoNb

The suspect, identified as Antonio Armstrong, is about 22 years old with black hair and brown eyes. He is about 5 feet 10 inches tall and weighs around 200 pounds, officials say. Armstrong has a microphone tattoo on his neck and was last seen traveling on Eight Avenue, according to officials.

Armstrong is Gaines’ biological father and officials say he took her without permission, though no further details on any custody relationship were immediately clear. Police say the baby was taken under circumstances that lead police to believe she is in imminent danger of serious harm or death.

Anyone with information is asked to call the NYPD’s 32nd Precinct at 212-690-6315 or dial 911 to provide information on a report or sighting. 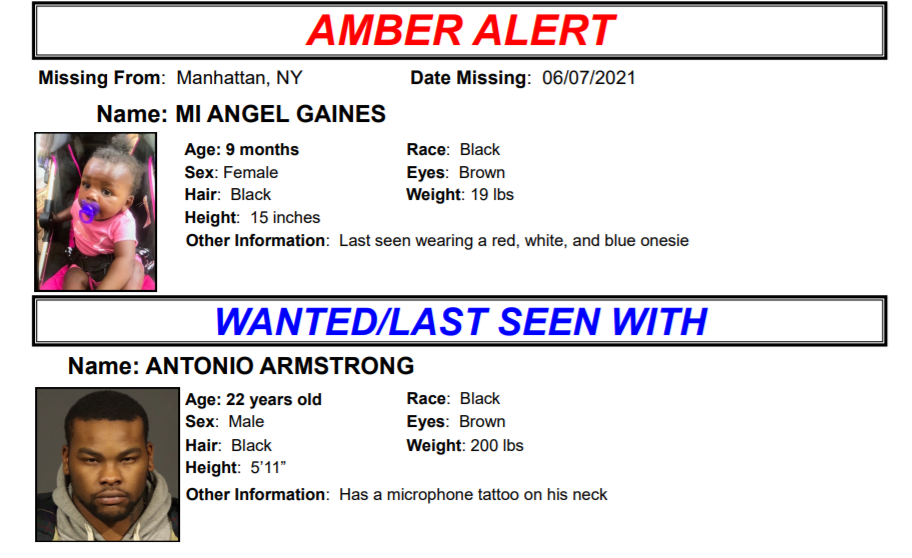